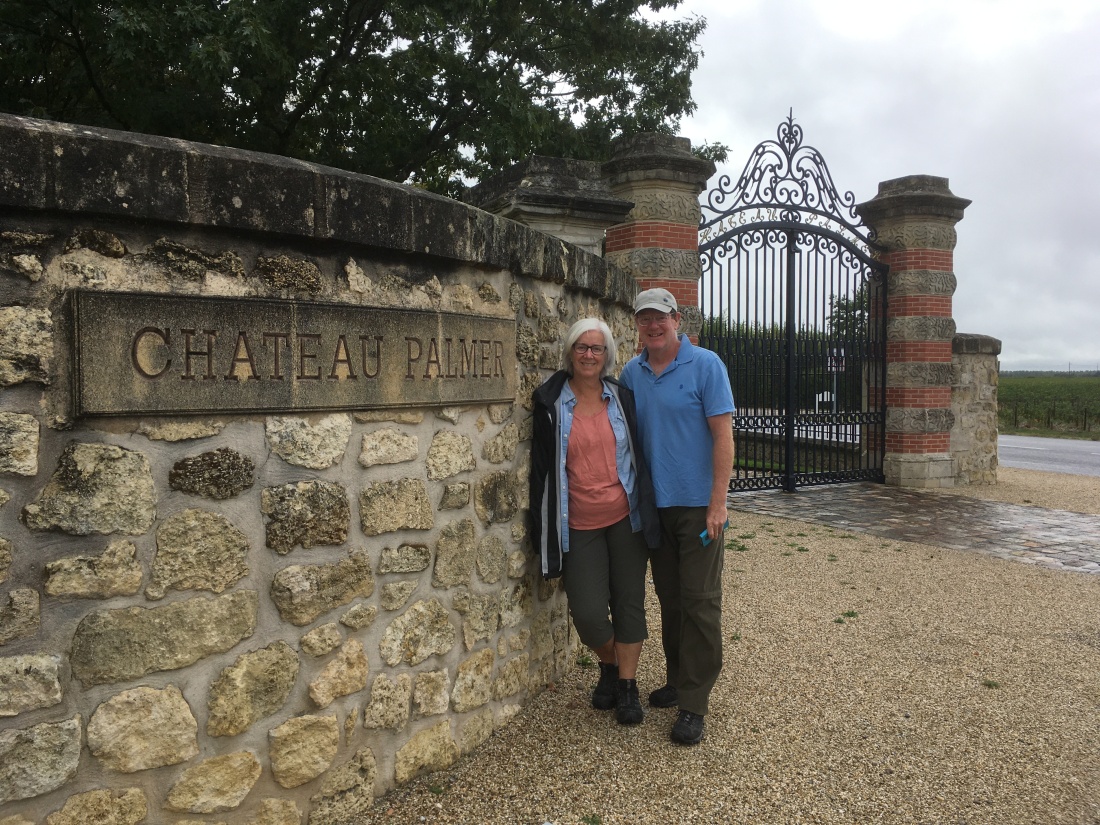 NO LONGER Under construction….Albert’s mecca destination has required some very diligent reflection… and his inspired prose will follow soon…. IS HERE!!!

With our friends Lori and Mike in the car, we set out from Jarnac after soaking in the changing riverbank scenery along the Charente and looked forward to the very wine-oriented city of Bordeaux. Luba and Bill were meeting us in Bordeaux, while Jill and Cam headed north. We drove for an hour or so through incessant roundabouts and 50-60 Km/h secondary roads and, after very little discussion, decided to stop in for some “real coffee” at the next available Patisserie. We found a convenient spot in a small village along our route. A great “from scratch” bakery with delicious pastries and acceptable push button Café au lait. Cars and trucks whizzed by a meter or so from our table literally causing the related wind to blow our hair around.

We eased onto the highway and set a destination for Bordeaux using toll roads, enough of the roundabouts etc. It was a pleasant two-hour drive from Jarnac to Bordeaux with increasing evidence of vineyards related to this large grape growing region. It produces around 20% of France’s premium wine and is home to thousands of estates (each more commonly known as “Chateau”) encompassing around 300,000 acres. Annually they produce about 700 million bottles and within this production is about 12% of the world’s premium wine. Mecca if you like a wee tipple of the stuff now and again as we do. The region of Bordeaux is arguably the most successful and influential wine region in the world

Most of our accommodations had been booked only a few days in advance through online resources such as Booking and Hotwire so the element of surprise and anticipation of what we found ourselves in next added a real sense of adventure. Fortunately, we had not been disappointed (some choices were understandably better than others) and we accepted the fact that, sometimes, you may get a bit less than you paid for. This seemingly haphazard reservations technique is not for the faint of heart. If you are a person that can’t tolerate that sort uncertainty our methodology may be too adventurous. For the city of Bordeaux our party of six found 3 rooms in an economical hotel called Residhome Bordeaux and it turned out to be a great choice!

Located a 10-minute walk from the famous Cité/ Musée du Vin and situated on the banks of the Garonne with easy access to the heart of the city via metro tram, we were set up. The rooms were equipped with some cooking facilities and a marché downstairs, so we managed a couple of on-the-fly home-cooked meals during our stay. After checking in we wasted little time in setting out for La Musée.

La Cité du Vin is an impressive and intriguing architectural monument on the left bank of the Garonne River in the city of Bordeaux. At an estimated cost of $80,000,000€ (Wikipedia). The shape of the building evokes movement of liquid and was designed to symbolize the river that is situated beside it, a metaphoric grapevine and the swirl of wine in a glass. (Deb thought it looked like a boot) If you are within site and walking distance, it draws you closer to investigate how the shape and iridescent colours of the windows are accomplished. We were captivated and didn’t hesitate to pay the $20€  each to take it all in. There are three large floors to explore in the permanent exhibits. The immersive experience features content encompassing the full gamut of wine history, grape cultivation, science-based production techniques, sensory experiences, life sized 3D projections, animated diorama presentations from wine professionals, cultural milestones and commercial practices focusing your participation in an experiential learning format that is hard to resist.

After 2-3 hours in this overstimulating environment, we made our way to the Belvedere room for our complimentary tasting that was included in the price of admission. The Belvedere area is located on the upper floor and offers sweeping views of the surrounding city. Nice spot to savour a glass of wine.

Hungry and tired we stopped in at the wine store (because you know there had to be a wine store!) before leaving and made our way back to the hotel for a great potluck dinner.

Although Bordeaux is spread out over a large flood plain (part of the huge Gironde estuary of the Dordogne and Garonne Rivers), our one and only day to see it was limited to a small area known as the Left Bank. With time being of the essence and so much to see (just in the Left Bank) we plugged the coordinates for Chateau Margaux into the GPS and ventured into the cloudy, misty morning of Sept. 22nd.  We made our first stop in Cantenac, Haut Medoc. The wines here are some of the most sought after in the world and fall under the Margaux AOC. We took some pictures outside of a quaint (think turrets, sprawling stone wall enclosed lawns, garden and fountains – that kind of quaint!) little estate called Chateau Palmer, examined some of the plump and juicy Cabernet Sauvignon grape that was ready for picking and took note of the gravel rich soil that epitomizes the local terroir here. We hopped back into the car and poked along the D2 a little further (fighting the lack of intuition the GPS had for our requests) to go to the actual Chateau of Margaux. Everything in the sector is called Margaux something-or-other so the best we could do was drive around ogling the various luxurious estates that were abundant in, and around, the town of Margaux.

It being Sunday, the town was all but deserted and parking in the Tourist Info lot was a cinch but getting info was not going to happen. We strolled along the street, found a patisserie, drank a coffee and stumbled on a wine store called Cave L’ Avant Garde. Lucky for us, they had the very bottle (750ml) of vintage 2000 Chateau Margaux that we were looking for at a glaring deal of 1290€ ($1850 CAD).

No. We didn’t splurge, although we knew we were worth it. Maybe next time!!. We did find wine in our price range though. Our friends picked up a wine that was to be a treat with dinner. In addition, they found a souvenir bottle of unique locally produced (pardon the mixed product description – particularly to our Glaswegian friends) Bordeaux, Scotch style, Whisky. Who knew?!. While completing our purchase, the very knowledgeable and helpful, store clerk gave us her business card and cleverly mentioned they sell futures for the yearly vintage commodity of Bordeaux Wine -“Give us a call in April if you would like to purchase the En Primeur wines for last year” she said. Duly noted! Well how to follow that up…

We headed for the local cemetery… Ok it wasn’t really our plan to see the cemetery but from a distance the ancient church looked interesting and when we arrived their service was in session, so we strolled the cemetery. The ancient headstones and the names inscribed there of those who had likely been the founders of this unique world wine wonder was fascinating.

We finished our sightseeing in the Medoc by going to the ancient Fort Medoc. In the commune of Cussac. This was an important part of a three-part fort strategy to protect the Gironde Estuary back in the 16th century. This unscheduled detour was much like many of the unexpected gems we explored along our tour route. A road sign crops up and someone says “you wanna check this out?” and suddenly you are walking in a 16th century fort (or cathedral, or castle or whatever, the list is never-ending) that, in this case, protected troops defending the sovereignty of France in a bygone era! We walked through and marvelled at the silent history and time etched architecture before returning to Bordeaux in time for a dinner out.

Our friends, Lori and Mike, had been recommended a place that offered a “Steak Frites” (basically a 6oz. NY steak, shallot butter sauce and as much pommes frites as you can eat) for $20€. We hopped the tram outside the hotel and after a short walk arrived at L’ Entrecôte to find a line up 80 people deep. No problem, the restaurant opened and the line moved quickly, and we were in without too much pain and suffering. Dinner arrived quickly after ordering a nondescript bottle of red “L’Enrecôte” Bordeaux.

The meal started with a simple green salad dressed with a tangy white wine vinegar/walnut oil vinaigrette and dressed with fresh whole walnuts (Yum, simple and delicious). The steaks arrived promptly, on a platter, perfectly cooked and sliced, swimming in a delectably rich, cholesterol packed, melted shallot butter. The fries were served tableside and more arrived as we delved in. Stuffed! “Dessert? But of course, Monsieur! One of each!!”  Panna Cotta, Chocolate Pudding Explosion and profiteroles were soon set down.

We ambled out as our insulin fought off the impending hyperglycemic haze only 1.25 hours after sitting down. Before we hopped back on the tram, we took a quick detour to the Monument Des Girondins Fountain which is located next to the departing trams. The sculpture seemed to come alive in the low evening light, animated by shadows and cascading water. The plan for the following day was agreed on, get on the road early and get a prompt start on the next stage of our journey. Spain, we felt up to the task.

Our next one will be about our time on the Spanish beaches and seeing Barcelona. Stay tuned!!